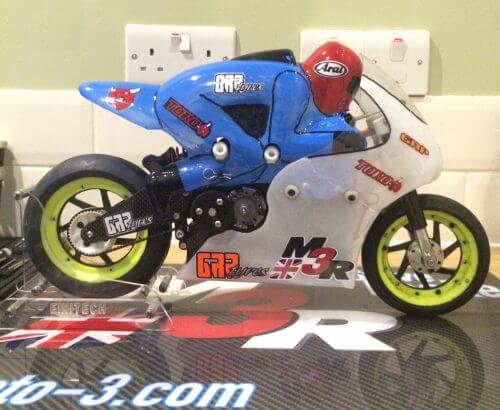 CNC Routing A New Frame Design For The 2016 Race Session 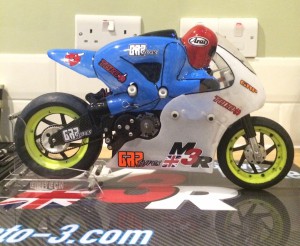 Last year I cut one for Steve Leake (Finance & production), Matt Tims (Design & Cad), Andy Carless  (Graphics & web-site) and Scott Adderson (Body mould maker), M3R radio controlled motor cycle kit out for black Fr4. Steve and his team wanted to develop a new frame in a cheaper but tough material. Fr4 / G10 being perfect for this application, I was the man for the job. His other bike frames being CNC routed from carbon fiber.

Pictured above is one of the carbon fiber kits that has been test fitted with the new body shell.

The Team’s main aim was the lower the price of the frame to encourage new people to try out the world of racing these radio controlled electric motor bikes.

In early testing the Fr4 frame was impressive, recording  great lap times, even with out much tweaking / set-up.

I popped down to one of Steve’s race meeting at the Aldershot Model Car Club . It was a bright day and I took my camera with me. These bikes are 1/5th scale and move fast, so photography was challenging. Everybody at the meeting was very friendly and I found the gent running the Chefs van most welcome around lunch time.

The results form the 2105 Fr4 bike, encouraged Steve and his Team to push hard for improvements they could make for the 2016 bike. Steve contacted me in early Feb 2016 telling me they had developed a new frame with less parts and an improved layout. One of the changes is the way the the ESC plates now connects to both of the side frames and there are less holes to be counter sunk.

It was nice to work on a new project and do some cnc routing on the model radio control motor cycle parts made from fr4 g10.

I cut one of the kit for Steve to test fit. Although it fitted perfectly together, like most assembly’s designed on CAD, once you have the parts in your hands and you have physically assembled it, there is normally a few tweaks to be done, or holes to be moved slightly to increase clearances.  A few minor tweaks later, and I was asked to cut the remaining 11 sets. 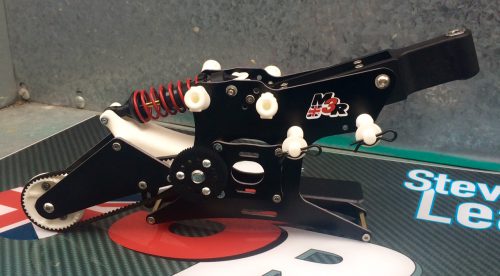 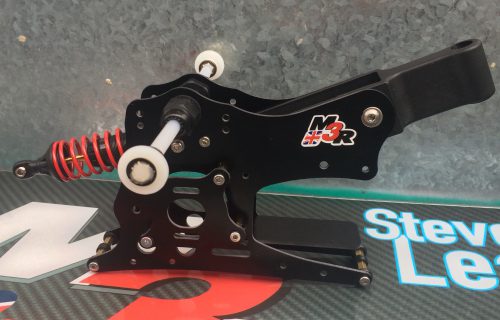 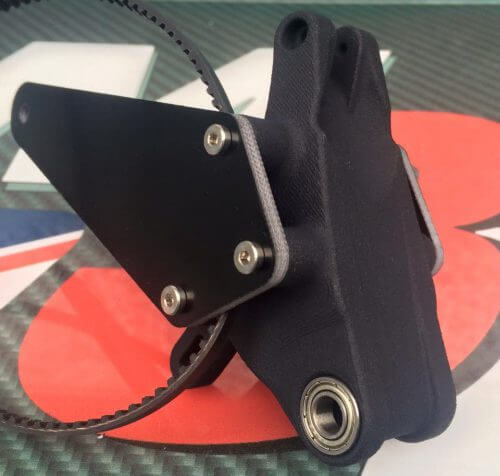 To the right is a set of the Black 2105 Fr4 parts The small triangle part (top left) has now been designed out, and the ESC plate has changed to an interlocking design.  The ESC plate now has little lugs that allow it to be held between the main plates without any additional fixings. 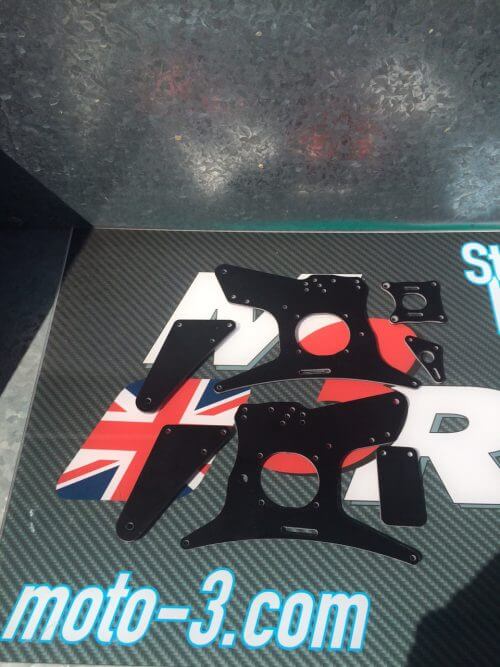 So that’s a little background now on to the machining. 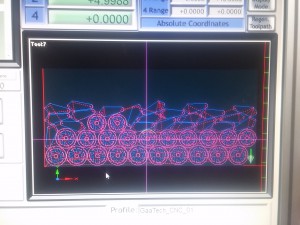 The DXF files that Steve had prepared were converted into CNC data files and loaded in the my 900 x 900 mm router. I uses Mach3 software to drive the machine.  My router has a 2.2Kw water cooled spindle that can spin up to 24,000 Rpm.  It also has vacuum hold down but for these small parts its not usable.

All Part Require To Be Screwed Down On The CNC Table 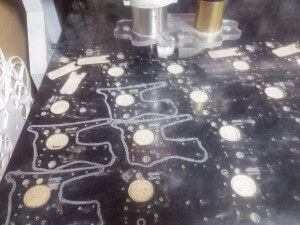 Main frames parts being CNC routed. All parts held down with 8mm screws

As the parts are quite small, the first thing to be cut are the 2 and 3 mm holes. A 2 mm burr bit is used to route the 2 mm holes, after a tool change, to a 3 mm bit, the 3 mm holes are completed.  I use the 3 mm holes to screw each part down, with short 8 mm screw, at least two screws in each part, into the my 18 mm MDF spoil board. This will ensure that the parts will not move during the routing of the other parts of the design. (This will be come much clearer later, I had one part that failed). 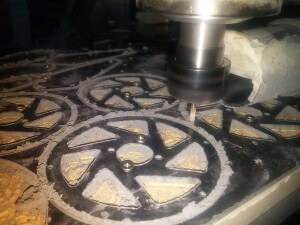 As I have used screws, in the CNC code I make sure that when the spindle is moving between operations, that it retracts up be 10mm, so it will clear all of the screw heads. I have learnt to double check the CNC code before I starting to make sure this distance is correct and that I have not asked the CNC to double drill any of the 3mm holes as this will trash a £6 coated bit.

You can see in the photo above and the video below that the parts are screw down.  Fr4 creates a lot of dust so make sure if you try cutting the stuff that you protect yourself correctly.

In total the parts took 5 hours to cut all parts, they were cut slowly as this increase the accuracy of the cut, push to fast and the router bit will snap like a dry tree twig.  Cleaning the parts and packing is on top of this, as well as cleaning down the machine after use.

Cleaning Up – What Fun

Parts being cleaned ready for packing

Once cut, now comes the enjoyable part, not, washing the parts to remove the dust. They are washed twice in warm water and scrubbed with a nail soft brush and left to dry for a short time, then they are towelled over, stacked and taped together ready for dispatch. I normally use Royal Mail or Parcel Force.  Sometimes this washing / cleaning process makes the protection film lift in the corners, they is not way to re-stick this.

The following parts are shown “as cut” before they have been washed so the dust makes the edges look soft.

The swinging arm was only held down with one screw so moved, notice the damage to the part on its front edge. It moved by around 2mm

During the cutting of the 3 mm parts I did not screw one of the swinging arms down with two screws, and the part moved during cutting.  You can see in the photo that the part is not symmetrical and where the router bit completes the cut on the outside a  “nick” can be seen.

Screwing the parts down and preparing the CNC files correctly, to allow you to screw the parts down takes time, but it is well spent.  Its made easier by using a small battery cordless hand drill.

Fr4 / G10 Edge Finish With & Without The Protection Film

Edge finishing with protection film. This part has not been washed. You can still see traces of the MDF spoil board

Edge finishing no protection film. This is the part that was not screwed down correctly and moved

You can also see from this photo that the edge finish does not look great, don’t worry this is the protection film, which is on both sides of all parts in this kit.   Also this part is straight off the table, so no cleaning, you can see traces of the MDF from the spoil board.

The thin protection film does not CNC well when using the “Burr ” or “Chip Breaker” bit, it tends to tare and leaves these stringy edges.  I can assure you that the edge finish once the film has just been pealed off looks great as can been seen here.

I really enjoyed cutting these frame parts, it makes a nice changes from the standard mini quad / multi rotor parts / car / aircraft; and just general plates.  The general stuff just gets routed and dispatched and I have no idea what they are going to be used for.

So to be able to cut something with a story behind, for a local group of great people has been really enjoyable.  I look forward to seeing these parts running around a track at full throttle very soon.

I look forward to seeing some of these bikes racing in a few months.

More information can be found upon the M3R website www.moto-3.com

To Steve and his design Team, keep up the good work and Happy Racing in 2016